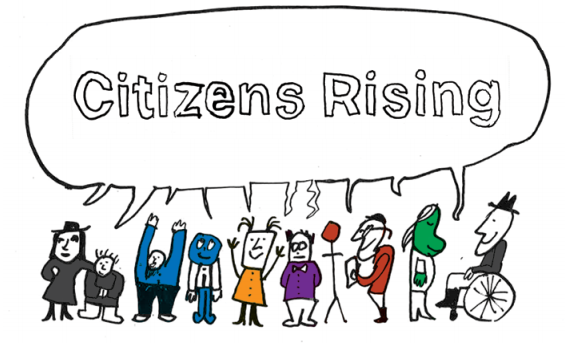 The Wheel today published a report which sets out a framework for placing citizens at the centre of public decision-making. The report entitled Citizens Rising emerged from The People’s Conversation, a year-long series of “citizen conversations” supported by the Carnegie UK Trust.

“In the upcoming election we’re likely to hear plenty of talk about ‘political reform’. The message of Citizens Rising is that we need nothing less than total democratic renewal to create a fully participatory democracy,” said Ivan Cooper, Director of Advocacy at The Wheel.

“Tools and methods for citizens to be more involved in public decision-making are now well- understood and have been demonstrated in practice in Ireland, most recently with the Constitutional Convention. It is now time for these methods to be mainstreamed, to transform our representative system into a fully participatory democracy,” said Mr Cooper.

The report recommends that citizens are resourced and supported, and active citizenship nurtured through civil society and the education system. “We also need to understand citizenship in its broader, international context, and not just as a technical or legal status,” said Mr Cooper.

Citizens Rising is a response to a series of vibrant, open and challenging conversations which took place over the past year. Fifteen different civil society organisations convened over 30 conversation group meetings. Meetings took place in community centres, in the offices of national voluntary organisations, in hotels, arts centres, and in prisons. People taking part responded to the questions, “What is shaping our future?” and “What do citizens expect and what is expected of citizens?”

People of different backgrounds and life experiences shared their view on today’s Ireland and how our future is being shaped. A series of common themes and one unifying aspiration emerged: in the coming decades the people themselves must be more involved in shaping Irish society.

Commenting on the launch of the report Martyn Evans, Chief Executive of the Carnegie UK Trust said: “The People’s Conversation demonstrated the passion people have to get involved in shaping their futures when they are encouraged and supported to do so. It has piloted a form of citizen conversation which, if adopted more widely, can provide the inspiration for citizens to take on active roles in our public life. A necessary next step in realising this vision of active citizens and empowered communities is to create and resource spaces and opportunities for citizens to gather together for respectful dialogue, to share insights and inspire each other to action.”

Mr Cooper added: “The centenary of 1916 is an appropriate time to ask if the dream of equal citizens shaping their own futures is still valid and, if so, how it can be realised in today’s Ireland .This is an opportunity to set ourselves the task of making the next century the “citizens’ century”.